My New ASUS Router Wants To Spy On Me

After a recommendation from coworkers, and reading/watching some reviews online, I decided to get a new router. I purchased the "ASUS Rapture GT-AXE11000 WiFi6E" router in particular for its nice network analytics and QoS features.

On unpacking and setting up said router, I'm disappointed to find that the features I purchased the router for require that I give network analytics data over to a third-party. 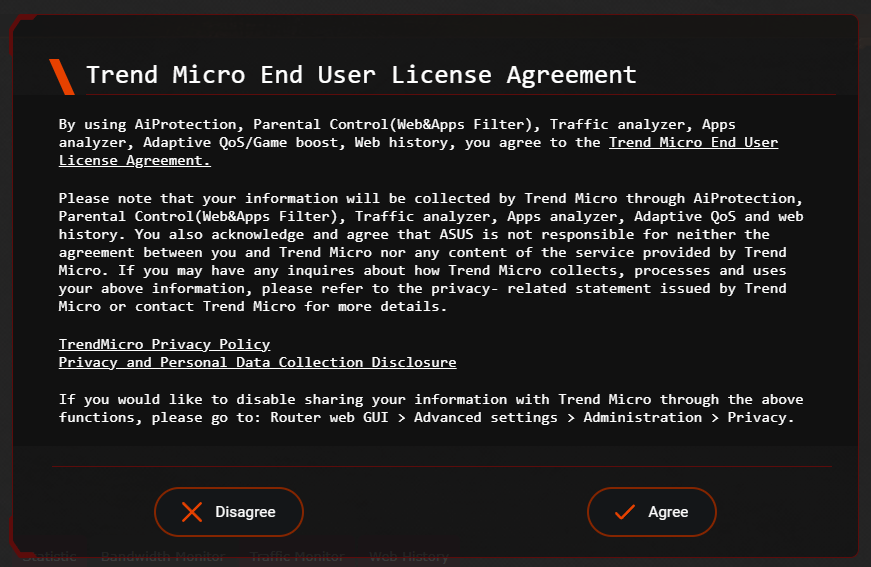 The last line of that popup says:

If you would like to disable sharing your information with Trend Micro through the above functions, please go to: Router web GUI > Advanced settings > Administration > Privacy

For a brief few seconds I was naive enough to think that the issue was just that this behavior was opt-out instead of opt-in. So I headed over to the Privacy settings to opt out.

However, please note that such features/functions may not work if you stop sharing your information with Trend Micro.

"May not work" my ass! If you withdraw consent it just disables the features entirely, and then tells you:

Please note that users are required to agree to share their information before using [the features that I bought this router for].

At least now (after a couple router restarts to apply settings) they're telling the truth. This is not an "option", it's a requirement.

If I go back to the "Statistic" or "Bandwidth Monitor" tabs, they're now disabled:

I'm considering returning this router for one that won't try to spy on me. There is NO reason for this kind of thing in my home router, a device which should be prioritizing my own security and privacy. And certainly not for features like QoS or bandwidth usage monitoring.

Does anyone have recommendations? I want something that:

I do not trust myself to write software without some form of type checking. And I prefer more typing (ex: nullability, generics) when it is available.

This comes from a long history of realizing just how many errors end up coming down to type errors -- some piece of data was in a state I didn't account for or expect, because no type system was present to document and enforce its proper states.

Relatedly, I trust other programmers less when they say they do not need these tools to write good code. My immediate impression when someone says this is that they have more ego than self-awareness. In my opinion, it's obvious which of those makes for a better coworker, teammate, or co-contributor.

Fixing your code before the weekend is like cleaning your house before you go on vacation. So much nicer to come back to. 😊

Me: I dislike that the usual software engineer career path is to move into management. I just want to write cooode!

Also me: (leading standup today, being taskmaster, making sure we capture details into tickets, unblock people, shuffle priorities from Product Mgmt, volunteering to help other devs w/ something they're stuck on) I am actually quite good at this.

So Twitter came out with a great new feature today: You're not allowed to link to other social media web sites.

At both the Tweet level and the account level, we will remove any free promotion of prohibited 3rd-party social media platforms, such as linking out (i.e. using URLs) to any of the below platforms on Twitter, or providing your handle without a URL:

It's a laughable attempt to stop the bleeding of people fleeing to other social networks, and it's going to Streisand Effect itself into the (figurative) Internet Hall of Fame. Most of the point of Twitter for many is finding and posting links to interesting stuff online.

What's next, a ban on "free promotion of prohibited 3rd-party news sources" that point out what a ridiculous policy this is? (Though, I suppose that's not far from what they're already doing -- banning reporters who unfavorably cover Musk.)

FeoBlog is not yet banned, of course, because it's not on anyone's radar. What can I do to get some more users and get it noticed?

If you want to give it a try, it's open source software, so you can download it and run your own server. Or, if you don't want to bother with all that, ping me and I'll get you set up with a free "account" on my server. :)

To avoid infinite loops (say, if you've got a message that is actually causing your app to crash, or otherwise can't be properly processed), each message has a "receive count" property associated with it. Each time the message is fetched from the queue, its receive count is incremented. If a message is not processed by the time the "maximum receive count" is reached, instead of going back onto the queue, it gets moved into a separate "dead-letter queue" (DLQ) which holds all such messages so they can be inspected and resolved (usually manually, by a human who got alerted about the problem).

That generally works so well that today we were quite surprised to find that some messages were ending up in our DLQs despite the fact that the code we had written to handle said messages was not showing any errors or log messages about them. After finally pulling in multiple other developers to investigate, one of them finally gave us the answer, and it came down to the fact that we're using Lambdas as our message processor.

So here's the issue, which you'll run into if:

Whatever Amazon process feeds SQS messages into that lambda will fetch too many messages. (I'm not sure if there's a way to tell if it was in a large batch, or lots of individual fetches in parallel, but either way the result is the same.)

Every time it does this, it increments the messages' receive counts. And of course when they reach their max receive count, they go to the DLQ, without your code ever having seen them.

This happens outside of your control and unbeknownst to you. So when you get around to investigating your DLQ you'll be scratching your head trying to figure out why messages are in there. And there's no configuration you can change that fixes it. Even if you set the SQS batch size for the lambda to 1.

If you think you might be running into this problem, check two key stats in the AWS console: the "throttle" for the lambda, and the DLQ queue size. If you see a lambda that suddenly gets very throttled which correlates with lots of messages ending up in your DLQ, but see no errors in your logs, this is likely your culprit.

It seems crazy that it works this way, and seemingly has for years. AWS's internal code is doing the wrong thing, and wasting developer hours across the globe. Ethically, there's also the question of whether you're getting billed for all of those erroneous message receives. But I'm mostly worried about having a bad system that is a pain in the ass to detect to work around.

Me, minutes before a meeting: Just one more line. One more line of code.

Me: "Why do I put the cap back on my water bottle after every sip? This is annoying even to myself."

Also me: Knocks over the full bottle I just minutes before had placed between me and my keyboard and yet had somehow forgotten existed.

For a while I'd been maintaining 2 versions of the FeoBlog TypeScript client:

But maintaining two codebases is not a great use of time. So now the Deno codebase is the canonical one, and I use DNT to translate that into a node module, which I then import into the FeoBlog UI, which you are probably using right now to read this post. :)